We spent a lot of time at the beach last week, so I blew through a few more books. I had a goal to read 25 books before the end of 2014, and I am well on my way to surpassing that number. All of the books below were solid, though for completely different reasons.Get your read on.

Me Before You  by Jojo Moyes — This is a great book club book, because it’s a bit controversial, and I wish I was a part of a book club, so I could bounce my thoughts off other people. Whether you like the book or not you will have an opinion about it. Moyes deftly brings readers into the world of disabled people and the people who love and care for them with this semi-romantic story. The main narrator, Louisa, is fired from her steady job, and ends up taking a job as a caretaker for a quadriplegic. Her charge, Will Traynor, is a man from a wealthy upbringing who used to live on the edge — From skydiving to deep sea diving to buying and selling companies, nothing was out of his reach, until a car accident changes his life. Through various narrators, we watch Louisa and Will become closer and even fall in love, but there’s a catch, and it’s a Doozy. I can’t tell you much more without ruining the book, but trust me when I say the end of this book is a kick to the teeth.
I’ve read reviews from folks who didn’t like the ending, but that wasn’t where I got hung up. I personally wanted to shake Louisa and her selfish sister more than once and found them to be annoying. I was more irritated by the use of a sexual assault, and how it was supposed to have effected the character, but I didn’t feel like it was consistently portrayed. Still, a compelling read, good to be shared with a few friends, so you can debrief.

Landline by Rainbow Rowell — I devoured the three previous novels by Rainbow Rowell after stumbling upon Eleanor and Park a few months ago. My anticipation for this book was so high, not only had I per-ordered my copy, but I’d also set a phone alarm to wake up early so I could begin reading. There’s something about her writing that I find freakishly compelling, she knows people — good and bad. Her characters are so believable, that I think I could recognize them on the street. Landline did not disappoint. The premise of the story is ridiculous, which is another reason I loved it: Georgie’s marriage is already on the rocks when she gets an amazing job opportunity. The only catch is she has to work over Christmas. Her husband, Neal, seems to have one foot out the door, when Georgie decides to stay behind, and their marriage looks like it’s over. Add in that Seth, Georgie’s oldest friend, work partner and at one time, crush is the one she’s staying behind to work with, and things get complicated fast. The story takes a magical turn when Georgie realizes that the old yellow phone at her mother’s house connects her to Neal — Neal from 1998. What happens next is just awesome, making me even more of fangirl for RR. While none of her books are categorically the same, if you trust her, she will take you to great places. 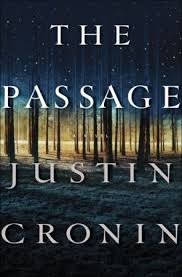 The Passage by Justin Cronin — I feel guilty about just getting to this book. I’ve known about it since its release back in 2012, but never got around to it, even after several reader friends recommend it. Now looking back, I think it was destiny that I just started this in this journey with Cronin. When the US army creates a weapon to end all wars, they unknowingly bring on the end of the United States and possibly the world with a virus that turns humans into vampire-like creatures. But these are not your Twilight vampires or even Anne Rice sex fiends, but monsters called Virals with only one thing in mind: Destruction. It seems the only hope is a little girl named Amy, who is also infected with the virus, but appears unharmed and has special abilities including a longer life span. The book begins with government experiments on men from death row, which leads to the virus’ outbreak, and then flashes forward to the future, one hundred years later when it seems there are more Virals than humans. Cronin is an amazing writer, and the story becomes less and less fantastical, which makes it all the more creepy. Amy meets up with a crew of young folks from one of the last known human strongholds and together they try to take back the world from the Virals. When I was in Barnes and Noble last week, I just happened to see the second book in the series, The Twelve, on sale. Yeah, I didn’t think twice. 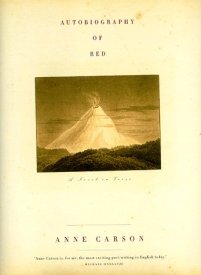 Autobiography of Red by Anne Carson — It’s not often one can read a book of poetry the way one reads a novel — straight through. I find myself reading one or two poems, and then putting the book down for a few moments, sometimes days. This is the reason why a slim volume of poetry, like Lilah Hegnauer’s Pantry, takes me three weeks to read completely. On the other hand, I finished Anne Carson’s stunning Autobiography of Red in one sitting on the beach. Based loosely on the surviving fragments of the lyric poet Stesichourus’ poem Geryoneis, Carson creates a love story between the mythological hero, Hercules, and the monster, Geryon, who Hercules eventually kills as his 10th labor. Geryon was immediately a character that I fell in love with, because of his unawareness of his own power, and the way he looks at the world. Hercules is less the hero we know,  and more the asshole boyfriend every girl has to get through to understand that nice guys aren’t so bad. And yet, Hercules is irresistible, and I understood why Geryon loved him. The poems are kinetic and seem so easy, using slang and colloquiums, interspersed with folklore and mythos, but that is the sign of a master poet, when the reader feels at ease. I cannot recommend this one highly enough. Get out of your comfort zones, and don’t assume you can’t read poetry for pleasure. My friends, that’s the freaking point of poetry.

Behind the Beautiful Forevers by Katherine Boo — This book came to me. Seriously. I was in the book store looking for something easy to read after the breakneck speed of The Passage, and I just happened to see this book on a table. Of course, I’d heard of it, and knew that it had been one of Oprah’s book club books and that it’d won a National Book Award. But I admit freely that lately I’ve been shying away from books that deal with tough issues, because, well because I’ve been a coward. I think I picked this book, because I was tired of looking at the world through the rose-colored glasses of books like Landline. I do believe that books with potential happy-ever-afters are as important as books that report human trials and suffering, but the impact of the latter resonants with me longer. Let Boo bring you into the slums of Annawandi, right outside one of the airports in India’s capital, Mumbai. Follow the lives of a trashpicker, a slumlord, and college student where they live in shanty houses next to a sewer lake. Boo’s reporting background shines through this book, but she goes even deeper than a news story, and the book feels personal. It’s a quick read, but I felt like I knew Abdul and Manju, Asha and Sothil.  Boo does not wear kid gloves, instead she brings you down into the muck of the slum, and you will not come out clean again or be able to look away from the way so many people live in poverty.